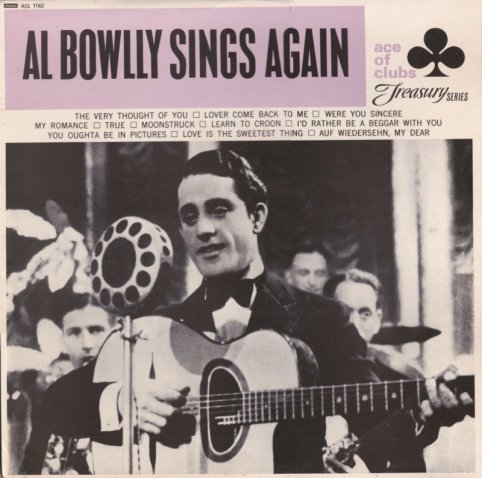 The night skies of London during 1941 were filled with the droning of enemy aircraft bent on blasting the life and spirit out of this ancient city. Although battered and weary the inhabitants at no time gave any indication of defeat and the life of the metropolis carried on as nearly normal as possible. The cinemas and music halls were playing to capacity audiences; theatre land, although darkened to the outside world by the black-out still sparkled with all it’s old brilliance inside the theatres, and in a hundred dance-halls and clubs the bands and vocalists of the swing era were entertaining thousands of Londoners determined to enjoy themselves—Hitler or no Hitler. April the 16th of that year, was a typical example of one of those nights. The crowds had groped their way home through the murky streets and prepared for another battle of the blitz and the sirens were sounding throughout the south-east of England. That night is remembered as one of the worst of the battle of London, and as the weary citizens prepared themselves for another day’s work their newspapers carried the headlines announcing the death by enemy action in the early hours of April 17th of one of the greatest stars of the London musical scene —AL BOWLLY.

Al, who had been called by many England’s Bing Crosby’, was at that time at the height of his career and was recognized as the most popular vocalist n the United Kingdom. For the decade prior to his untimely death his warm and intimate style of singing had been heard over the air-waves from the B.B.C., and countless thousands had been entranced by his crooning with some of the greatest bands in this band-laden era. Possibly ‘croon’ is not the correct verb to describe Al’s style of delivery, for his voice had about it a real sense of artistry, power and originality with a gift for investing the most banal of lyrics with real meaning.

Given a song with a true intrinsic value such as “THE VERY THOUGHT OF YOU”, he created something more than ‘just another song’ He would inject it with his personality and weave a golden sound which set him head and shoulders above his contemporaries. Although Al spent the greater part of his career working with large bands, a large number of his records were made with a small group and this setting seemed to suit the intimacy of his delivery, in addition to which it gave him full opportunity to use his distinctive style to it’s best advantage. The fifteen songs selected for this album are all in this setting, and each and every one is further proof of this fact. Albert Alick Bowlly, was born at Delagea Bay in Portuguese East Africa in 1906 and lived there until his parents decided to move to Johannesburg. This move to the Union of South Africa, was made without too much difficulty, for although his mother was of Greek origin his father had always retained his British nationality. Al’s interest in music was first awakened when as a youngster he used to sit and listen for hours to the Zulu and Bechuanaland mine boys providing their own entertainment after a day in the mines around Johannesburg. Some of these miners were exceptionally gifted on the guitar and it was not long before the young Bowlly had persuaded his parents to buy him a cheap guitar and he was busily engaged in emulating the strange rhythms which he heard at those impromptu concerts. Upon leaving school Al was apprenticed to his brother-in-law who ran a barber’s shop. This was a fortunate step for Al’s relative also had a flair for the mandolin whilst his fellow assistant loved nothing better than to strum away on his guitar. It was only a matter of time before the three of them had formed a group and were spending most of their spare time practising.

Once again fortune smiled on Al, for it was during one of these slack periods in the shop that a famous band leader walked in for a haircut and heard him singing. The maestro was so impressed with Al’s style and delivery that he offered him a contract with his band and Al embarked on a world tour with Adler’s Syncopated Band, a tour that was to lead to world fame. Eventually Al found his way to London and joined Fred Elizalde’s band at London’s Savoy Hotel in June of 1928. His engagement with this band lasted until December of 1929 when AI found his luck had temporarily run out, a state of affairs which were to continue until January, 1931. As the early days of the new year passed coldly by Al, so the story goes, was reduced to singing in the streets as a busker, when he was seen by Bill Harty, at that time on drums with Roy Fox, who persuaded him to come along and audition for Fox. The audition was a great success and he was immediately signed to appear with the Fox band at the Monseigneur Restaurant in London’s West End.

When the leadership of this orchestra was taken over by Lew Stone, Al stayed on and eventually be-came one of London Society’s greatest favourites. His reputation by now, was such that Ray Noble, who was leading a band in New York’s famous Rainbow Room, asked him to join him as the band’s vocalist. This was in 1935, and as soon as Al had fulfilled his London commitments he took Noble up on his offer and sailed for America. Unfortunately his triumphs in Manhattan proved to be short lived, for in January of 1937 he was stricken down with throat trouble and was forced to quit the Noble orchestra and return to England. His homecoming how-ever turned out to be something of a triumphal return and he was welcomed by a public who had reserved a place in their affections for this talented South African. Al formed his own band and took it out on a protracted music-hall tour packing them in wherever he appeared.

It was while on this tour that he was introduced to an American who told him of a surgeon in the States who had had some success with the malady which was troubling Al.

Bowlly decided to investigate the truth of this information and in October of 1937 he sailed for New York. The operation, which was of a dangerous nature and could have resulted in the complete loss of his voice, was an unqualified success and Al was seen back on the bandstand and in the recording studios.

The closing years of the thirties found him appearing throughout the country in night clubs and on the variety stage as a soloist and occasionally as a double act with fellow vocalist Jimmy Mesene as “The radio stars with two guitars’. As far as his voice is concerned there is considerable recorded evidence in support of the theory that it was even better after the operation than before,having taken on a richer and more mellow tone. With the advent of the fateful forties, Al had reached the zenith of his profession and was in demand for every media of entertainment.

With Al Bowlly’s untimely death the world of show-business lost one of it’s greatest artists, a man with a voice and personality which were to prove irreplaceable, and an entertainer who is warmly remembered by countless thousands throughout the world.